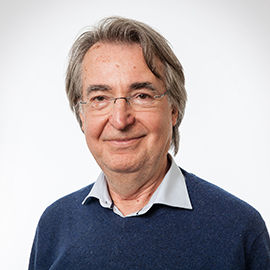 Transcribed and written by Gayathri Hariharan

Having completed more than three decades of an illustrious career in teaching and research , Associate Professor Carlos Infante Ferreira will officially retire this March. A friendly, approachable face to students, Dr. Ferreira has mentored and sparked many young minds. Speaking about his choice to move to academia, he says,“After a few years in industry, I recognised that it is quite nice to exchange ideas with young people and learn from them as well. At some point I felt like coming back and contributing to education. The future is of the youth and it is good to share some experience with them”. His commitment to nurture the next generation was clearly seen when he enthusiastically recollected and  shared the projects and awards won by his students.

Having completed his PhD in 1985 at the Kramers lab, TU Delft, he worked with the industry for a few years and returned to academia later. He admits ,” This is not a common career path. Nowadays to stay in academia, one has to complete a post doctorate and then climb the academia ladder. It is difficult to go to industry and come back- there are only a handful of people with career trajectories similar to mine.” Having had a taste of both the worlds- academia and industry, he pinpoints the difference between the two,” Industry research is money or goal oriented. For example,you are hired to launch a new product in the market and you have to show results. Often in Academia, research is curiosity driven with long term goals. But cooperation with industry makes the goals more valuable and most of the research at EFPT is done with practical, immediate applications in mind.” Dr. Ferreira’s forte lies in heat driven systems, refrigeration , heat pumps, compressors, heat exchangers, green chemistry and sustainable heating and cooling solutions. The list is endless. More recently,he has worked on OTEC systems (Ocean thermal energy conversion), Ionic liquids for absorption and Magneto-caloric systems for heat pumps. Optimistic about the future for this field, he expects electrification of heating systems to replace their conventional counterparts,”Netherlands wants to reduce their dependence on gas fired systems- for this, heat pumps with high performance will play an integral role.The challenge largely lies with efficiency. We need to strike the balance between efficiency and costs. Magneto caloric systems could replace conventional vapour compression cycles- but quite an amount of work has to be done to realise this on a large scale.When hydrogen takes off on the industry level, we must be ready with systems that can comply with this change. Overall,there is an interesting and challenging future for this domain. ”Given the plethora of work he has done, it is only natural to wonder what projects or topics he cherishes the most- a hard choice to make for any researcher. “ I have always been working on absorption systems and mainly interested in solar thermal applications in heating and cooling. We have worked on novel solvents , strategies to increase concentration of solar radiation, for example through Fresnel collectors- that is something I am quite proud of. I have also been working with Prof. Isabella from the PVMD group at EWI department on exploring the potential of high performance photovoltaic cells for such systems. I see a future for such applications and hopefully it succeeds.”

Today, a world of research papers and journals is only a click away and education is always reinventing itself with growing technology- take online classes for example. A very Gen Z thing to say, but isn’t it puzzling how researchers worked at a time before the internet. He laughs and explains,” Yes, the technological transition has been very quick.Earlier,we had a limited number of journals and conferences with high citations. We would go to the library, go through the editions and make a copy. I still have some of the copies I had made during my PhD days. And even today, the highly ranked journals and conferences are always a good starting point for your research. Definitely , digitisation of information has made life quite efficient. We used to have punch cards to access a central computer and things were a lot slower. Nevertheless, I have no regrets and I am happy with the resources we had then”. As a professor does he see any changes in students’ attention span or knowledge over the years,” No, I would say both the generations of students are comparable. Not more lazy or more distracted- just the same.”

It is a challenging search for a person to fill his shoes.Presently,the department is scouting for someone to continue Prof. Ferreira’s research in refrigeration, heat pumps and heat exchangers and students can work with them for their research. He clarifies, ” I know that Juriaan Peters is interested in heat exchangers, mainly CFD related. Most of my courses are online on Collegerama but clarifying more specific knowledge will be challenging. I hope that the younger generation of my colleagues will be interested in these topics because these are quite important for the future”. As we wrapped up our interview,  I could not help but wonder if he plans on learning or continuing any hobbies in retirement. Laughingly he explains.” I don’t know. I will still be somehow active in this field. I have to do a lot of modifications at home, maybe take up gardening?”.Encouraging students to explore different areas to find their calling, he says,” Go for the topic and things that you find most interesting. Don’t forget that we have to come to a sustainable way of living and contribute to it as much as possible”.

On behalf of the Dispuut Prescott Joule and the entire EFPT Department, we thank Carlos Infante Ferreira for his exemplary work in research and education and wish him the best for the future!