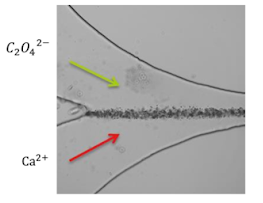 Microscopic image of the microfluidic channel that mimics biological pathways. Fatma has studied crystal growth at the converging area of channels. This is a configuration found in the human kidney as well. The black dots at the middle of the section are the crystals formed in the experiment. Image provided by Fatma Ibis. 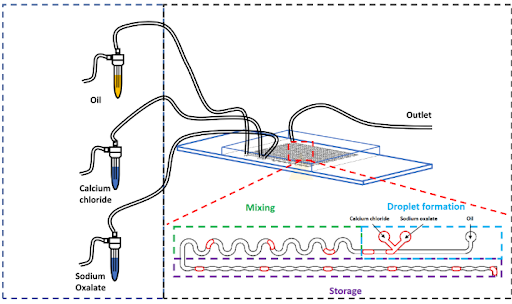 An illustration of the droplet-based microfluidic device developed by the group. 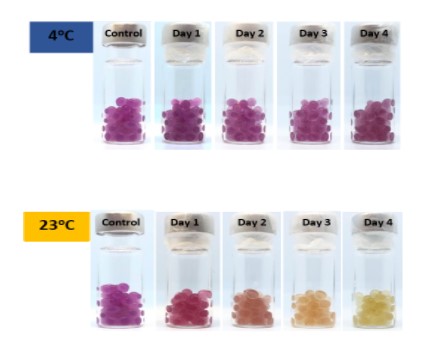 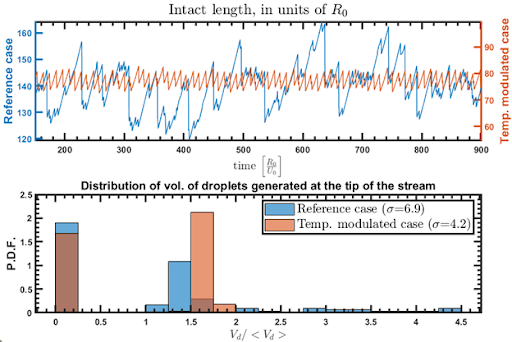 The image compares the intact length and drop size distributions for the unperturbed and thermally modulated case. Using thermal modulations, the size of the droplets can be actively controlled.

The Discover series I – The Eral lab

By Gayathri Hariharan and Sowmya Kumar

It is hard to classify the work of the Eral lab into any one domain. In their own words, the Eral lab is at the interface of separation technologies, hydrodynamics and soft matter. Ranging from understanding kidney stone formation to developing edible barcodes, the projects are diverse with far reaching applications. Assistant Professor Burak Eral completed his doctorate in Physics at the University of Twente and has a strong background in experimental research. Dr. Eral is a strong exponent of the theory that any sound research must be backed by experimental, numerical and analytical results. Here we present to you an overview of the work currently done at the Eral lab.

CRYSTALLISATION IN THE HUMAN KIDNEY- THE KIDNEY STONE PROJECT

Fatma Ibis is a bioengineer who joined the Eral lab a couple of years back. Taking her background into consideration, Burak and Fatma decided to find a project that would also fit into the research theme of the then crystallization group (now, complex fluid processing). Enter- the Kidney Stone Project.

Fatma seeks to understand the formation of a particular type of kidney stone- calcium oxalate monohydrate crystals- in the human body. They study the effects of ion concentration (calcium and oxalate ions), the pH of urine and the role of inhibitors (found in drugs medically prescribed for kidney stone) in the formation of calcium oxalate crystals. They have developed microfluidic channels that mimic the pathways in the human kidney to study the formation and growth of crystals.

Microscopic image of the microfluidic channel that mimics biological pathways. Fatma has studied crystal growth at the converging area of channels. This is a configuration found in the human kidney as well. The black dots at the middle of the section are the crystals formed in the experiment. Image provided by Fatma Ibis.

The first step towards this study was obtaining the solubility curve of the solute (calcium oxalate) in the solvent. Using the knowledge obtained from the solubility curve, Fatma, along with her Master students,  have used droplet-based microfluidics to build a testing platform for the study of crystal growth inside the isolated environments provided by droplets. Preliminary experiments were performed by dissolving Calcium chloride and Sodium oxalate in ultrapure water (the solvent). This solution containing the ions forms the droplet phase and oil is used as the continuous phase.  Eventually, they have also performed experiments using artificial urine as the solvent , which brings the study closer to reality.

An illustration of the droplet-based microfluidic device developed by the group.

Fatma is already at the culmination of her PhD. In her four years, the group has developed unique devices that render an alternate perspective to the study of kidney stone formation. They have shown how microfluidics can provide a precise and simple means to observe the formation of Kidney Stones. They have utilized medical information to simulate the real-time biological environment of the kidney and to also understand the reason behind medical advice to kidney stones such as- ‘drink lots of water!’ or ‘drink lemon juice.’

The bar-code project is a collaboration between the Eral group and ETH Zurich. Microfluidic technology is used to develop edible barcodes (about 100um-200um) that can be attached to the capsule directly. This serves as a barrier against counterfeit medicines.

Mengmeng Zhang has a background in polymer technology and microbiology.  When she joined the Eral group to work on the barcode project, she advanced the scope of this project in a manner that would enable her to use her specialization as well. This led to the group working on building edible sensors to indicate food spoilage.  Their time-temperature indicator changes colour as the food (say fish) progressively spoils. (Did any of you smell rotten food in the Meth lab? We present the culprits to you!)  The quantification of the extent of food spoilage involves calibration of the sensor through microbial testing methodologies.  They have also built a humidity sensor that bends in response to moisture.

Prilling (I sense that quizzical look as you are reading- don’t worry you are not alone) is a process of manufacturing solid granular products from a melt. Largely used in the fertiliser and plastics industry, prilling towers contain huge jets through which melts are injected and break down into droplets. These droplets interact with cooling air in the tower and solidify. The project attempts to understand the process and identify parameters that control the homogeneity and quality of the granular solids. Although the project might seem quite niche, the fundamental fluid mechanics problem of jet breakup finds many applications, for example in inkjet printing. PhD candidate Yavuz primarily works on numerical investigation of the process.

The image compares the intact length and drop size distributions for the unperturbed and thermally modulated case. Using thermal modulations, the size of the droplets can be actively controlled.

While his work deals with non-isothermal jet breakup of non-Newtonian fluids, he is also involved in the rheological characterisation of the melts ( shear thinning and viscoelastic measurements). With the help of an experimental setup and high speed optics, he is able to use piezo induced perturbations to visualise the jet breakup. Previously, intensifying the prilling process was studied through a spiralling jet design and at present he is exploring the possibility of using thermal modulations to control breakup. Since the project is sponsored by the industry , it allows him to appreciate the perspective of the technicians and engineers – although both the worlds are quite different in their thinking.

Having completed his Masters project on crystallisation at the Eral lab , Vikram Korede is continuing his tryst with the topic through his PhD on Non-photochemical Laser Induced Nucleation (NPLIN) and anti-solvent crystallization. The project aims to understand how a laser beam interacts with matter and is a confluence of many fields- laser optics, multiphase flows, microfluidics, transport phenomena and crystallisation. Although this technique is still in its conceptual phase, it has the potential to enable controlled and continuous crystallisation in the pharmaceuticals and fine specialty chemicals industry. This work first aims at unveiling the nucleation mechanisms governing Laser-Induced nucleation, enabling a complete understanding of this phenomenon up to a point where it is possible to implement this technology in a scaled-up system. Gaining knowledge of the mechanism, this work further addresses the research gaps in this field in order to engineer a crystallization process capable of controlling nucleation temporally and spatially.

Although he is primarily focusing on understanding the fundamental mechanism of LIN along with Nagaraj Nagalingam (PhD colleague), with the help of master students,  a proof of concept experimental setups was built both at microfluidic scale and at pilot scale to understand laser-induced nucleation kinetics at different scales.  With the help of microfluidics, more NPLIN experiments can be performed easily at once allowing good control over the size of the droplets. In these experiments, each droplet acts as an independent microreactor for the crystallization process. A batch scale cooling crystallizer was built to understand the nucleation kinetics by comparing laser-induced nucleation experiments with the normal batch cooling process.

We would like to thank the PhD candidates from the Eral lab- Fatma, Mengmeng, Yavuz and Vikram for making time to discuss with us and giving us the inputs that form the backbone of this article. We have a lovely time speaking to each one of you!