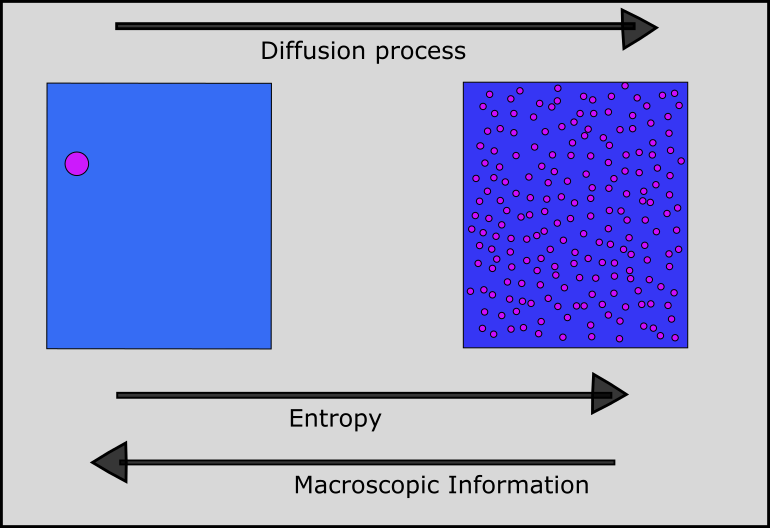 A representation of the diffusion process in terms of Entropy and Macroscopic Information. 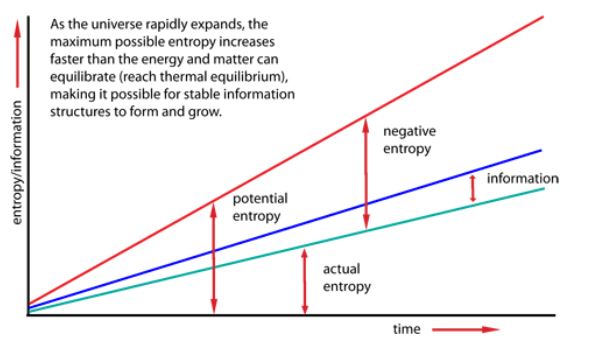 THE ARROW OF TIME

We are in search of a model for our Universe that resolves this conflict. To do that, we first gather a sense of what we mean by Entropy and Information, and seek a possible relation between these two quantities.

Now, we attempt to describe our diffusion example in terms of Entropy. In our example, while introducing the KMnO4 drop into the beaker, we create a departure from equilibrium by creating a concentration gradient of KMnO4 molecules in the beaker. In the final state of uniform concentration (or thermodynamic equilibrium), we thus expect maximum entropy to be attained by the system.  Thus, in terms of entropy, the diffusion process proceeds from an initial state of low entropy towards higher entropy.

A representation of the diffusion process in terms of Entropy and Macroscopic Information.

We define our system as the drop of KMnO4 molecules and water molecules in the beaker. When the drop of KMnO4 is introduced in the left side of the beaker, we know the volume of the drop which is Macroscopic Information. As the molecules move and collide with other molecules, correlations emerge between their velocities. After diffusion has reached a steady state, we may be able to measure (within some uncertainty) the position and velocities (microscopic information) of KMnO4 molecules to describe the state of the system.

The Heat Death is a proposition based on the belief that the Thermodynamic Arrow is the Master arrow that describes our sense of Time. It is the premise of the Heat Death argument that the initial state of the universe was a low entropy state or a state of maximum Macroscopic Information. The argumentation behind this proposition is that naturally occurring processes observed today tend to increase the entropy of the Universe. The Heat Death theory predicts that the Universe is ‘running down’ towards a state of thermodynamic equilibrium or an ultimate dead state where no processes can occur and anything and everything shall cease to exist.

However, it fails to explain satisfactorily, why we also see increasing complexity or order in the Universe as addressed by the Historical Arrow of Time.

David Layzer, in his paper titled ‘the arrow of time’, argues that it is not necessary that the universe originated in a state of thermodynamic dis-equilibrium (low entropy state) and the universe need not be ‘running down’ to its eventual death. He proposes an alternate theory to explain the origin of time that also resolves the conflict between the thermodynamic and historical arrows of time.

Such a speculation allows for the co-existence of the Thermodynamic arrow as well as the Historical arrow of Time. While the actual entropy of the Universe continues to increase (as governed by the second law of Thermodynamics), the rate of increase in the maximum possible entropy governed by the cosmic expansion may be higher, leading to the formation of astronomical systems and other complex beings. Thus, new information is continually generated in the universe.

An element of surprise

Laplace famously stated that if there was a demon that was well acquainted with all the laws of physics, had information of all the possible system interactions and had the ability to put all this data to analysis, then this demon could predict the future. What Laplace meant was that the future is completely deterministic and why it presents an element of surprise is due to our inability to collect all information and analyse it. To such a demon, all the world’s a stage. Men and women are mere players.

The work of David Layzer suggests that due to continuous generation of information, the universe itself never contains all the information of its future states. No demon or super computer can ever assimilate all the information since information is generated continually (like entropy). As conscious living organisms that directly perceive this Universe, we will always be surprised by the future.