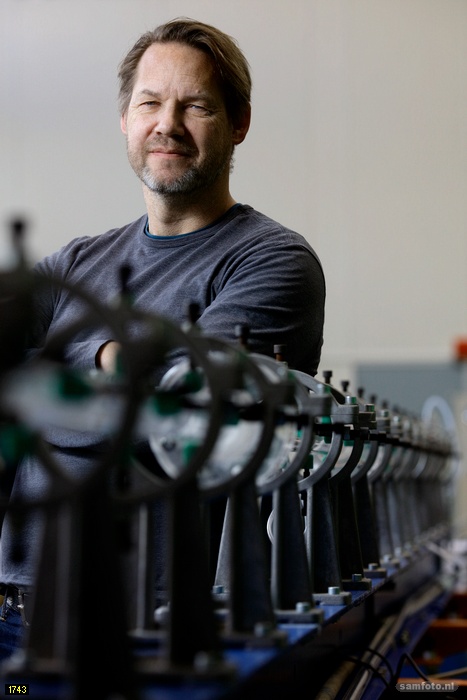 The Beginnings of Digital Measurement

Transcribed and written by Sowmya Kumar

The Chair, Laboratory of Aero and Hydro-dynamics (2005-present)

In 1986, Frans Nieuwstadt was appointed the chair of Fluid Mechanics at TU Delft. “Frans considered his theme to be ‘turbulence plus’ “, says Jerry. Acknowledging that certain laboratories in the US and Japan would always have access to superior computational facilities that outperform what was available in the Netherlands, it was Frans’ clever idea to investigate turbulence in relation to other processes, rather than just turbulence itself. His PhD students studied turbulence in combustion and mixing processes, the drag reduction attained in the flow by polymer addition and turbulence in particle-laden flows. “Most of Frans’ students have since evolved and developed their own theme”, observes Jerry. “The objective of a PhD or Master degree is to generate your own ideas.”

The theme of Jerry’s research is ‘Turbulence and Complex Flows,’ in which they study non-ideal turbulence and flow interaction with non-ideal complex surfaces. In a fluid dynamics book, we study the boundary layer over a flat wall or flow through infinitely long pipes.  “Where do we see infinitely long pipes, infinitely long cylinders or perfectly smooth walls?”, he asks. “Our work is to look at the non-standard cases. We find that rough walls and compliant walls behave quite differently.”

In the past, rowing blades were designed based on trial and error. Being a fluid dynamicist, Jerry sees the potential of applying aeronautical concepts of lift and drag in advancing designs of certain sports equipment.

In 2020, Jerry received the ERC grant to study the drag coefficient over objects that move at non-uniform velocities. “To perform new research, we need to look at a different class of flows. We could build a new wind tunnel, but the wind always comes from the same direction and with the same speed”, he explains. “The efficiency and behaviour of a wind turbine at constant wind speed is known. We now need to study how a wind turbine responds to sudden wind gusts. The research I am going to start is fundamental, but it has application in these areas.”

Being one of the first PhD students of Frans Nieuwstadt, Jerry set out to bring the Particle Imaging Velocimetry (PIV) technique from the photographic domain to the digital domain. “I sound like an old wheezer when I say this but when I started doing PIV, we still had to use photographic techniques. If you were able to record thirty negatives, you were happy”, he says. He realized that if we really wanted to investigate turbulence, thirty negative images of the flow weren’t going to be enough. We needed 3000 or 30,000 images. In 1990, Jerry attended a conference where he met people who were doing what he was and understood his idea. “That’s why it is important to present your ideas,” he says. “Some criticize, but some understand and you know these people for the rest of your career.”  Jerry’s PhD defense eventually led to a book, ‘Particle Image Velocimetry’, which he co-authored with Dr. Ronald J. Adrian. His achievement is in proving the usage of digital cameras to perform measurements.

Naturally, Jerry is very enthusiastic about the technique he helped advance. “Initially, PIV measurements could be made only in a plane but now we can make measurements in a volume, in multiphase flows and measure turbulent structures in three dimensions (tomographic PIV)”, he explains. “We can also extract the force and pressure fields from PIV data, eliminating the need for sensors. In this sense, PIV is complete.”

The struggle of an experimentalist, though, is often an air-bubble or a leaking connection. Having been an experimentalist over three decades, few could have seen more of it than Jerry himself. “With PIV, you need a flow facility, the laser and its traversing mechanism, your computer and the camera. When you have more components, more things can go wrong. You need to find the one moment when everything works correctly”, he says. “I should say that, in my lab, we have Edwin Overmars who supports the experiments and is extremely valuable. He helps students and researchers with fine-tuning and ensuring that the equipment works.”

With large water tanks and long pipes that are stationed across the halls, and the curious minds that thread its metal-strewn floors, the lab certainly churns out many stories that make for a good laugh. Jerry recounted one such instance when researchers wanted to conduct experiments with non-Newtonian fluids. A large column of glucose sat in the laboratory with tiny air bubbles trapped in its bulk. To get the air bubbles to the surface, someone suggested that they place the column in vacuum to fasten the process. “The column collapsed and there was 1000 L of glucose covering the laboratory floor,” he laughs. “Sometimes, people want to clean a facility and fall into the water basin.  Fortunately, there have been no bad accidents so far, no one got injured. We have been very lucky”, he adds. And, he ceremoniously taps the wooden table beneath his hand with his knuckles. 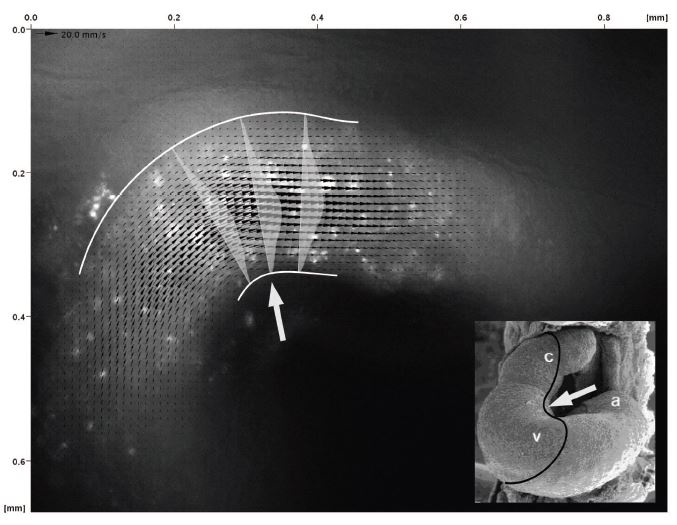 “In biological systems”, he notes, “you see the answer. You have to come up with the question.  In technology, we seek to optimize a design. But, with biological systems, we ask ourselves why the heart of the chicken has the shape it has.” Blood flow measurements in the embryonic chicken heart using PIV [1].

New research most certainly evokes skepticism. “I remember when I started out”, he recalls, “I was talking to my colleagues and other professors about what I wanted to do. Either I heard “It will never work” or I had to explain myself over and over again.” Digital PIV was an idea that faced its share of criticism, but it is interesting that the measurement technique itself emerged as a means to investigate turbulence, a field famously declared as the last unsolved problem of classical mechanics.

With turbulence, the fundamentals are constantly doubted and criticized. For example, it was accepted that turbulence is isotropic at the smallest scales, at very high Reynolds number. But surprisingly, we find that no matter how high a Reynolds number we reach, flow remains anisotropic at the smallest scales as well. This indicates that a ‘closure’ for turbulence isn’t exactly lurking around the corner, but Jerry outlined the progress we have made in understanding more pieces of the puzzle.

Coherent flow structures in turbulent flows was new in the 1980s. Now, it is possible to measure and investigate them. Furthermore, the mechanism of formation of these structures, how they interact with the flow and regenerate is now known. He emphasizes that new measurement techniques will steer us to understanding turbulence.

Before, measurements were made using anemometers. Naturally, we could measure only single points in the flow and turbulence seemed chaotic and random. With the advent of PIV, we are able to see the structures that emerge in turbulent flows. In this sense, another example is that eddies are thought of as the characteristic structures of turbulence. Recent research has revealed layered structures called internal interfaces in turbulent flows. We now think turbulence is organized in vortices only at lower Reynolds numbers. At very high Reynolds numbers, we see that vortices organize themselves into layers. The question that then emerges is why and what are the implications of such an organization on for example, how air pollution distributes in cities. “This observation was mainly triggered by using new measurement techniques”, he concludes. “The kind of measurement technique you use determines the way you interpret and understand turbulence.”

Jerry’s view that we ought to digress from investigating ideal cases towards real situations, however, reveals his share of doubts in solving turbulence. “I don’t think turbulence will be solved as a problem”, he reveals. “Some problems like homogeneous isotropic turbulence can be solved. It is not really ‘turbulence’ because there is no production of energy there, but we learn a lot of things from it. Also, improving simulation techniques helps us to improve our designs. We have succeeded in modelling a Reynolds number of 100,000 through a smooth pipe, but what about a rough pipe? In 50 years, they say they can simulate a complete airplane. But an airplane isn’t always on steady flight. What about during landing and take-off? How well will the airplane hold when it enters a thundercloud?”

“Can Artificial intelligence advance our research and aid our understanding?”, we enquired. The question extracts soft laughter from the 56-year-old researcher. “I consider myself too old for this”, he responds. “When new things come around, you should give it to the younger people. I think you should jump into that.” AI isn’t new, we have had neural nets for long. But combining the advancement in computational power with the large amounts of currently available data is where AI can play a role. Instead of investigating 5 cases during the period of a PhD, we can investigate 5000 cases. The real power of AI would lie in sorting information and discovering the standard and special situations.

“Chaos theory provided major jumps in our understanding of turbulence”, he explains. “I think AI will do the same thing.” Yet, he reiterates “I was once at a lecture and they basically said above the age of 35, you cannot completely grasp new technology. You have an open mind. I am limited by history.” 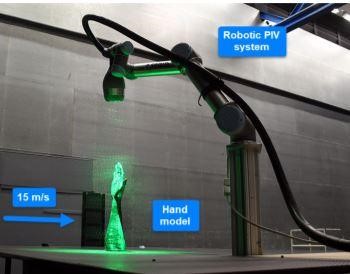 What is the efficient way for a swimmer to orient his hand? Should the fingers be held straight or cupped? Does spreading the fingers help? When swimming gets boring, questions such as these begin to spin on Jerry’s mind. Robotic volumetric measurements made on a full-scale swimmer’s hand [2].

A student, a Researcher, a Professor

“What is special about being a professor is that when I have an idea and I tell it to a student, he/she responds that it is a good idea, “I am going to do this!”. But then the student starts doing that, and that’s nice. But it is nicer when the student comes back to me and says, “Well Jerry, your idea was complete crap but now I have a better idea!” And that’s when I go home with a smile on my face.”

To Jerry, the most important skill of a researcher is creativity. “Creativity is more important than knowledge”, he declares. Being able to combine concepts and see the connection across problems is a highly valued skill. “Intelligence is nothing without creativity”, he says. “Technical skills are important, but they can always be taken over.  So, coming back to an earlier discussion, as long as we don’t have Artificial Creativity, humans are still necessary.”

He seems fascinated by the idea of ‘Artificial creativity’. “Well, that is something I got out of this interview”, he expresses with delight.